Area studies (ethnic studies, gender studies, and the like) are magnets for criticism. These are the fields harboring the academic villains of popular imagination: the purveyors of postmodernism, intersectionalism, “cultural Marxism,” and the like, who author fatuous and impenetrable tracts about how Taylor Swift and Miley Cyrus “perform white authenticity”, how green-skinned humanoids inform identity, the hobosexual as a concept in queer materialism, men’s sexist appropriation of cupcakes, and so on. Journals publishing this stuff were at the heart of last year’s Sokal Squared hoax. If I thought this sort of drivel were representative of non-STEM academia, I’d probably be issuing categorical denunciations right alongside Jordan Peterson.

It will surprise many readers to learn that one and a half million Americans are employed as higher education faculty, including over eight hundred thousand full-time professors and over seven hundred thousand part-timers. If any meaningful proportion of them were area studies faculty, it would be fodder for the alarmingly high number of Americans who’ve lost faith in higher education.

So I asked my indefatigable research assistant to survey a few schools for me to see just how many area studies faculty there were out there (previously she’d conducted a similar survey to establish that postmodernists were few and far between in academic sociology). The chart below shows faculty members with appointments in area studies departments. Some are jointly appointed in core academic disciplines.

There just aren’t a ton of area studies faculty. 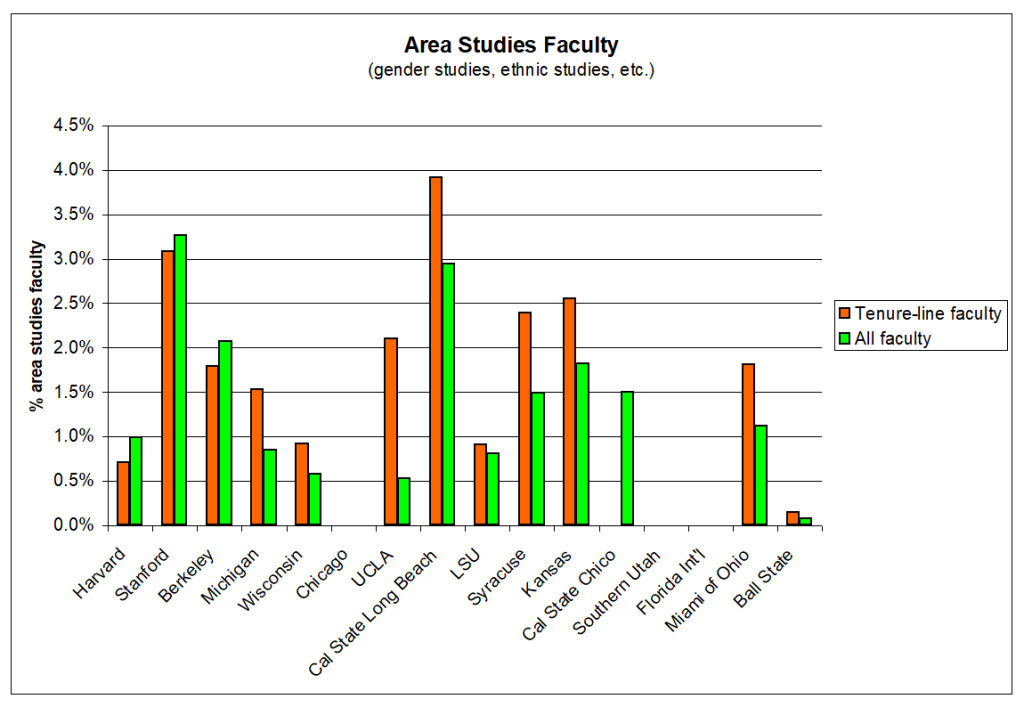 The overall rate only reaches four percent at one school, Cal State Long Beach (CSULB). Previously I’ve highlighted this school for its viewpoint diversity: its sociology department has an unusually high number of postmodernist or intersectionalist faculty, but also several conservatives. And until his retirement a few years ago, Cal State Long Beach even had a tenured white nationalist for a faculty member. This academic attracted considerable attention for his noxious views. Perhaps CSULB beefed up its area studies faculty as part of a backlash.

The number of area studies faculty seems disproportionately large in one regard: the puny number of majors it produces. There was a grand total of 2,114 area studies baccalaureates in 2016-17 (down about a hundred from the year before) out of 836,045 total graduates. They represent .25% of American college graduates (And almost none of these programs offer advanced degrees.) Area studies just aren’t popular majors.

Finally, it’s worthwhile to scrutinize departmental rosters when evaluating area studies departments. Many faculty members there will accord with stereotypes of nattering postmodernists producing impenetrable screeds. But not all, especially in the case of faculty who have duel appointments in a core academic discipline. For instance, Harvard’s Department of African and African American Studies includes many well-known scholars. Lawrence Bobo and Jim Sidanius are distinguished quantitative researchers. Henry Louis Gates, Jr. is an internationally renowned critic. None of them have ever written about green-skinned hominoids.

Bad scholarship deserves condemnation, and some of it does come out of area studies departments. But they’re a trivial part of higher education.