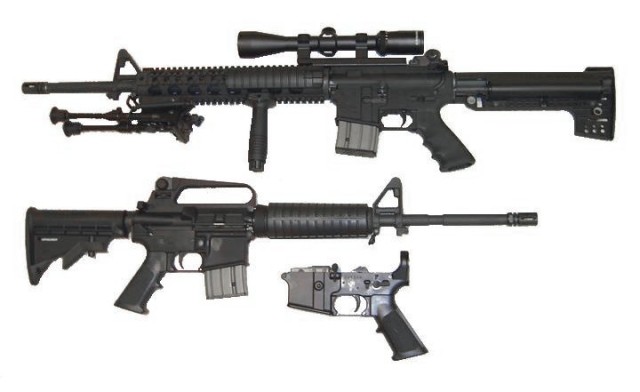 Almost 70 percent of Americans (including a bare majority of Republicans) want to ban new assault weapons sales, but a majority oppose mandatory buybacks (i.e., confiscation). In a recent op-ed I offer a proposal for a compromise that will let responsible owners keep their assault rifles, but keep them out of the hands of many would-be mass shooters: treat them like machine guns, legal but heavily regulated, with long waiting periods, background checks, and a federal registry. This is a genuine compromise between a ban or buyback, on the one hand, and the status quo on the other hand.

This idea has recently gotten some traction in national political discourse. In the October 15, 2019 Democratic Party primary debate the two front runners, Senator Elizabeth Warren and Vice President Joe Biden both offered support for this compromise in response to proposals for confiscation from other candidates.

Here’s Warren: “So, look, I want to get what works done. I want to use the method we used, for example, with machine guns. We registered them, we put in a huge penalty if you didn’t register them, and a huge tax on them, and then let people turn them in, and it got machine guns out of the hands of people.” (Full debate transcript here, or at 8:53 of video)

And here’s Biden: “The way to deal with those guns and those AR-15s and assault weapons that are on the street — or not on the street, that people own, is to do what we did with the National Firearms Act as it related to machine guns. You must register that weapon. You must register it. When you register it, the likelihood of it being used diminishes exponentially.” (Full debate transcript here, or at 11:25 of video)

If you like my idea, spread the word. You can find addresses for gun control groups and national campaigns at the end of this post. Mail my op-ed to gun control groups, legislators, presidential candidates. And yes, mail: letters are harder to ignore than are emails.

Here is a sample letter on Google Drive. Plagiarize at will.

Here are the few most common objections I’ve encountered:

1) You’ll never keep guns out of the hands of every mass shooter.

5) You don’t know what you’re talking about! Assault rifles are really selective-fire mid-caliber weapons, not the semi-automatic guns used in mass shootings.

6) I’m never giving in to you people!

Here’s how to write your member of congress or your senator. Just google them to find addresses.

Reaching a Compromise on Assault Weapons

Every mass shooting in the United States is greeted with a depressingly familiar response: heartfelt cries of anguish, calls for Congress to take action, GOP stonewalling, and then the status quo ante until the next tragedy. It doesn’t matter that tougher gun laws like universal background checks have overwhelming public support, even among NRA members. The power of the gun lobby remains too strong, and votes for gun control mean fewer campaign contributions, poor NRA ratings, and perhaps a primary challenge in the next election. So nothing changes, and sooner or later attention fades.

Many mass shootings involve military-style assault rifles capable of rapid-fire mass murder: equipped with a hundred-round magazine, the Dayton shooter killed nine people and injured at least 27 more in 30 seconds. It’s little surprise that every such tragedy gives rise to new calls for a ban on assault rifles. More than half of Democratic presidential hopefuls support a ban; the rest favor voluntary buy-back programs. Although public sentiment has fluctuated over the years, 70% of Americans now favor an assault rifle ban. But support for a ban was also high after the 2012 Newtown massacre, so few people are holding their breath.

There is a compromise position that would reduce mass shootings, but allow enthusiasts to own assault rifles. It lies in the federal laws governing machine guns, assault rifles capable of fully automatic fire. Building on the National Firearm Act of 1934 and the Gun Control Act of 1968, the Firearm Owners Protection Act of 1986 banned new machine gun sales but grandfathered in existing weapons. According to a 2015 ATF report, over 500,000 of these rifles remain in private hands.

Over time the federal government has codified a robust regulatory regime governing the transfer of machine guns between private parties. Buying one requires a background check (including a testimonial from a local law enforcement officer), a fee, a permit, and a wait of up to a year for government processing. All such purchases are entered into a federal registry.

That all adds up to a significant hurdle for would-be mass shooters, but the 30 years since the FOPA’s passage show that the strict regulation of machine guns works. No federally-licensed gun has ever been used in a violent crime, let alone a mass shooting. Why not extend this regulatory regime to all assault rifles?

It would be a substantial burden to would-be assault rifle owners, but a serious gun should require a serious commitment. ATF’s firearm licensing division would have to expand considerably. That would be expensive up front, but in the long run would save taxpayer money. According to a 2015 analysis, gun violence carries direct costs of more than eight billion dollars a year, including the expenses of long-term incarceration for the shooters. The indirect costs, including lost wages for murder and suicide victims, likely exceed an eye-popping two hundred billion dollars annually. These figures make the strict regulation of assault weapons seem like a bargain.

Perhaps few readers would be satisfied by the expansion of federal machine gun laws to all assault weapons. A substantial number of Americans want a total ban, while Second Amendment purists decry any infringement on their constitutional right to bear arms.

Or do they? The National Rifle Association has acquiesced to the hefty regulatory regime governing machine guns. In thirty years these regulations have remained immune to legal challenges. So too, for that matter, did the 1994 assault weapon ban, and, more recently, state-wide bans. America’s assault weapon enthusiasts would not be happy about new hurdles to gun ownership, but might ultimately be mollified if a beefed-up regulatory regime superseded an outright ban.

Applying machine gun laws to all assault rifles probably wouldn’t fully end their use in mass shootings, but would greatly reduce it. The 2017 Las Vegas shooter planned his horrific slaughter long in advance. He likely would have been able to obtain FOPA-regulated assault rifles. But the Vegas shooter is the exception rather than the rule. The El Paso killer is more typical, purchasing his assault rifle in the weeks before his rampage. The regulatory reform I propose would have stopped him.

The expansion of machine gun laws to all assault rifles wouldn’t end the scourge of gun deaths in the United States. Pistols, not rifles, are responsible for the vast majority of homicides and suicides in America. Indeed pistols, many of which are capable of semi-automatic fire, have been used in some of our worst mass shootings, including the 2016 Orlando nightclub shooting and the 2007 Virginia Tech massacre. And though they grab all the headlines, mass shootings account for only a small fraction of American gun deaths.

Most change is incremental, and tightening control of assault weapons would be an important step forward. The proposal described here would rely on laws already on the books, rather than creating a whole new regulatory regime. And it would be a genuine compromise, which might afford some political cover to legislators otherwise reluctant to vote for gun control.