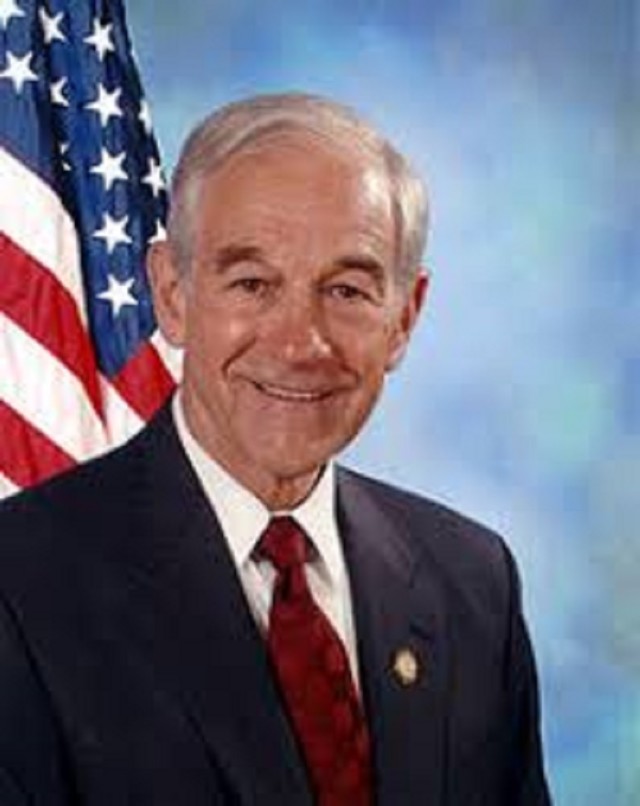 In a recent podcast, journalist Cathy Young drew an unlikely comparison between libertarian icon Ron Paul and the Soviet Union: Both used rhetoric that cast America as an evil empire.

Here is Ron Paul rendering this false equivalence on Meet the Press on Dec 23, 2007:

Q: Do you think there’s an ideological struggle that Islamic fascists want to take over the world?

Paul: Oh, I think some, just like the West is wanting to do that all the time. Look at the way they look at us. I mean, we’re in a 130 countries. We have 700 bases. How do you think they proposed that to their people, saying “What does America want to do? Are they over here to be nice to us and teach us how to be good Democrats?”

Q: So you see a moral equivalency between the West and Islamic fascism?

That’s fucking nuts. Islamic extremists are categorically evil. The US is not, despite some of its despicable foreign policy decisions, like Vietnam or the 2003 invasion of Iraq.

For its part, the USSR’s propaganda always described the US as an evil empire, prone to wanton imperialism. Central Committee document #148 of 1949 contained this language:

In print news media such as “Pravda”, “Izvestiya”, “Trud”, “Literaturnaya Gazeta”, “Komsomolskaya Gazeta”, “Bolshevik” and others, organize systematic publications of materials, articles and pamphlets, unmasking aggressive plans of American Imperialism, inhumane character of social and political order of the US. . .

The following themes should provide the basis for anti-American propaganda in press, radio and movies:

Capitalistic monopolies of US inspirators [sic] of aggression policy

US stronghold of colonial enslavement and colonial wars

In short, you can believe that the US shouldn’t be involved so much overseas without losing all moral perspective, as Ron Paul and the Soviet Union both did by casting America as an evil empire. The United States has generally, especially in recent years, managed to provide a reasonable quality of life for its citizens; the Islamic State and the Soviet Union did not.

What’s more, Ron Paul is compromised by the racism that occurred in his office. He’s denied any direct involvement, but that hardly absolves him of guilt for the newsletters issued in his name.

“Order was only restored in L.A. when it came time for the blacks to pick up their welfare checks three days after rioting began.” The writer gives no credit to police, state troopers or soldiers from the National Guard and Army and the Marines who helped end the chaos. A separate article from the Survival Report said, “If you have ever been robbed by a black teenaged male, you know how unbelievably fleet-footed they can be.”

The Paul publications also insulted gays, saying they “enjoy the attention and pity that comes with being sick,” referring to AIDS.

Another newsletter suggested that black activists who wanted to rename New York City after Martin Luther King, Jr. should instead rename it “Welfaria,” “Zooville,” “Rapetown,” “Dirtburg,” or “Lazyopolis.”

These articles informed readers that Paul had voted against making Martin Luther King, Jr.’s birthday a federal public holiday, saying “Boy, it sure burns me to have a national holiday for that pro-communist philanderer, Martin Luther King. I voted against this outrage time and time again as a Congressman. What an infamy that Ronald Reagan approved it! We can thank him for our annual Hate Whitey Day.”

I totally get Ron Paul’s appeal. The Iraq War was senseless and depraved. So too are mass incarceration and marijuana criminalization. Indeed, Paul was the only candidate even talking about weed. So Paul developed a following, never mind the rest of his record.

Did Ron Paul’s candidacy inspire people to become libertarians? Just how representative are his policy views among libertarians?

It turns out there’s little consensus. While Paul favored marijuana decriminalization, not all libertarians do. Here’s one making a case AGAINST marijuana legalization:

Or take abortion. Ron Paul repeatedly claimed that he was pro-life (Incidentally, Paul also claims it’s within states’ rights to ban birth control, although he doesn’t think they should.) Yet the national Libertarian platform is avowedly pro-choice:

Recognizing that abortion is a sensitive issue and that people can hold good-faith views on all sides, we believe that government should be kept out of the matter, leaving the question to each person for their conscientious consideration.

Elsewhere the Libertarian platform is given to maximalist language:

All persons are entitled to keep the fruits of their labor. We call for the repeal of the income tax, the abolishment [sic] of the Internal Revenue Service and all federal programs and services not required under the U.S. Constitution. We oppose any legal requirements forcing employers to serve as tax collectors. We support any initiative to reduce or abolish any tax, and oppose any increase on any tax for any reason. To the extent possible, we advocate that all public services be funded in a voluntary manner.

Um, so we go back to funding roads with excise taxes? This is how the government was funded before the income tax, with taxes on liquor & tariffs. Virtually all libertarians—well, virtually everyone, except Trump—see tariffs as inimical to trade and free markets; indeed, they raise prices for everyone.

I broadly object to consumption taxes, like excise taxes or a national sales tax, as regressive. They’re flat taxes, and disproportionately burden the poor and the middle class. Unlike the wealthy, these folks spend all of their money; the wealthy mostly save and invest theirs.

Indeed, nothing so regressive was proposed by Gary Johnson in his 2016 presidential campaign on the Libertarian Party ticket. Here are his public pronouncements on economic policy. They tilt far from party orthodoxy:

He’s arguing for far less federal spending, and less government involvement in the economy. But is he arguing for the abolition of IRS & federal income taxes? Of course not.

It’s worth noting that smaller American political parties often have more extreme official positions than its associated candidates or national politicians. For example, the Democratic Socialists of America writes this:

We believe that the workers and consumers who are affected by economic institutions should own and control them. Social ownership could take many forms, such as worker-owned cooperatives or publicly owned enterprises managed by workers and consumer representatives.

And a little later in their platform document:

In the short term we can’t eliminate private corporations, but we can bring them under greater democratic control.

Thirty years ago Bernie Sanders believed all this, but no longer. AOC has said absolutely nothing about public ownership of the means of production.

If nothing else, we can be glad that members of smaller political parties don’t adhere to the maximalist positions advocated by their official party platforms.

Many libertarian positions sound great in principle, but would be disastrous in practice. Take libertarian opposition to the Export-Import bank.

What the hell is the Ex-Im bank? It’s an 80 year old government agency that subsidizes U.S. exports. On the surface, that sounds like the very essence of crony capitalism, the kind of thing any good libertarian would support getting rid of. Such arguments ignore the fact that the bank creates economic opportunity in the United States while turning a profit.

What would happen if we got rid of it? U.S. exports would instantly become less competitive, not least for the fact that every other country buoys its own exports with its own Ex-Im bank. Putting our bank on the chopping block would thus place American exports at a disadvantage compared to other countries.

Another example: government subsidies for energy research. The legacy American energy companies—Big Oil and the like—are focused on increasing the supply of extractive energy. They have little incentive to fund the development of alternative energy sources. Government funding is therefore vital.

But libertarians would ax all this important government activity on principle.

To be sure, I see the appeal of libertarianism. I agree with libertarians on many issues, most notably on social issues. With an informal two word slogan–Less government!–libertarians have a more coherent platform than either Democrats or Republicans. But in practice, it wouldn’t work well. Perhaps this is why the world has never seen a true libertarian nation?