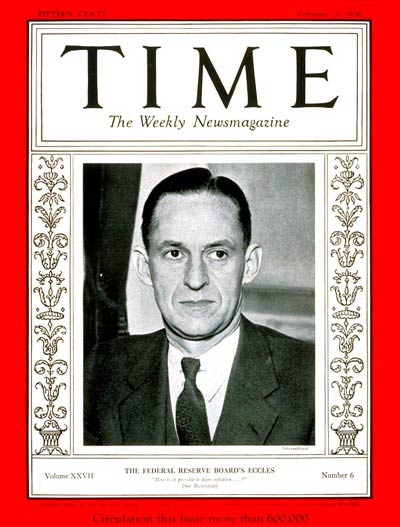 If you live in Salt Lake City or are involved with the University of Utah, you might following a local mini-scandal: The university has agreed to take ten million dollars from the Koch brothers to fund an academic program devoted to promulgating Koch brothers values (limited government, low taxes, low regulation, and so on). There will be a matching donation from the Marriner S. Eccles Foundation, a local charity.  This isn’t a new story: for decades the Kochs have been buying influence at American universities.  This has been chronicled in Jane Meyer’s great book Dark Money.

In case you’re not up on the relevant history: Marriner Eccles was FDR’s chairman of the Federal Reserve.  He promoted Keynesian economics before Keynes himself first wrote of them. Marriner Eccles was therefore instrumental in lifting America out of the Great Depression.  He was also the first businessman to oppose the Vietnam War.  In short, he was a great man, and so I was honored to hear from his grandson, also named Marriner Eccles.

Mr. Eccles contacted me after reading an excellent open letter written by members of the Department of Political Science at Utah.  The letter made a strong case against the Koch donation.  Seeking to get the word out, I posted the letter on my blog with permission of Mark Button, chair of Political Science.  This is how Marriner Eccles came to read the letter.

He emailed me a long statement about why the University of Utah should refuse to take the Koch money. In particular, he thought that the Koch values were antithetical to what his grandfather had believed.  He and I agreed that targeted donations–donations that directed a specific course of study–had no place in higher education.

With his permission, I am reprinting his letter here.

Marriner Eccles letter about Koch donation to the University of Utah

Having read both Mr. Wolfinger’s statement to the University of Utah Academic Senate and Mr. Hiltzik’s recent article in the LA Times, I believe it is time for one Eccles family member to express agreement on a number of your positions.

I rarely involve myself in Utah politics since I am a resident of California and have no authority over any of the various Utah Eccles Foundations. This guardianship was created decades ago by their founders, which established authority through senior partners of a local family law firm and executive members of the First Security Bank of Utah.

I am, however, familiar with Marriner S. Eccles, the principal in question regarding most of the issues discussed by you and recent attempts to fund an institute bearing his name.  Marriner was my Grandfather and until his death in 1977, we shared a close bond and friendship few people get to have with someone of his historical importance.  He raised me as his son when my father, his eldest son, died in 1960. I also have a relationship with the University of Utah. After graduating from Stanford in 1971, I returned to Utah and graduated from both the Business School and the Department of Economics with degrees in finance and economics in 1976.  I returned to California and worked with Bank of America in the Asset and Liability Division of the World Banking Division.  I am now retired and as mentioned earlier, living in the Bay Area.

Both of you are undoubtedly well-versed in Marriner’s history and accomplishments: from his New Deal proposals before Congress in 1933, to the 1951 Treasury Accord, to recognition of China, Population Issues, and later as the first business leader to oppose the Vietnam War in 1964.

None of these positions or accomplishments throughout his life remotely resonate with any policies or positions advanced by Charles Koch. To attempt to name an institute in Marriner’s name, partially and conditionally funded by Charles Koch, may advance the standing of the Koch Family, but is antithetical to what Marriner stood for his entire public life.  Aside from perhaps a shared belief that private economic markets are the most efficient mechanism for allocating scarce resources among completing needs, Charles Koch and Marriner Eccles have nothing in common.

The University of Utah Academic Senate should renounce the offer of funding this institute based on the conditional 8-year grant from the Charles Koch Foundation, and secondly, should the Koch Foundation rescind its conditional support in favor of a one-time no strings offer, the name of the institute should be The University of Utah Institute of Economics and Quantitative Analysis with reference to Marriner S. Eccles omitted from the title.

I have attached a redacted speech Marriner delivered to the Economic Club of New York over 75 years ago when he was Chairman of the Federal Reserve.  Try to see if you can imagine Charles Koch in front of this audience reading these words today.

It is imperative to meet now the needs of those who, through no fault of

their own, have no jobs, no security, no tangible stake in the society we

wish to preserve. As a democracy we can’t afford to take the position

that because economic conditions are satisfactory for many of us, others

who are less fortunate can be shunted aside, or merely kept alive by hand­

outs, until economic revival develops at some unpredictable future time.

Aside from humane considerations, it is not good government, good democracy,

or good economics to lose the productivity of millions of workers. Those of

our people their only possession is a job. When that is gone, they have but

slight reason to remain loyal to our institutions and our economic system.

work are a meaningless mockery to a man who cannot find a job.

Democracy cannot survive half free and half slave— with millions

of people enslaved to poverty, unemployed, and in misery, on the one side,

and great wealth and affluence, with idle money and idle resources, on the