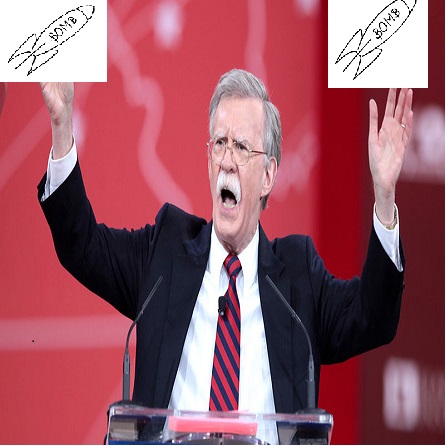 Note: Every name is a pseudonym except for public figures

My Twitter friend Alexi is an ardent Trumpist. I communicate with this pseudonymous “deplorable” because he’ll politely and intelligently defend his beliefs online. He’s a lively debater and a window into a part of America I don’t understand and rarely encounter. I know little about him aside from the fact that he lives in the Bay Area. A few days ago he remarked that he was planning to attend the annual San Francisco Lincoln Reagan dinner—why no Teddy Roosevelt?—and asked if I had any questions for John Bolton, the speaker. Bolton (aka, the dude with the moustache) was Bush 43’s UN ambassador, a somewhat ironic appointment for a diplomat skeptical of the UN. Alexi and I shared the same opinion about Bolton: he probably wants to squander another $50,000,000,000 getting people killed in Afghanistan. I instantly offered to join him at the dinner. Fearful of getting doxed, Alexi put the kibosh on an actual meet-up. But thoroughly intrigued by the prospect of a weird ethnographic adventure, I went anyhow to this public event after some apprehension about giving $125 to the local GOP. That was the cheapest ticket; I opted not to spend $8,000 to eat at Bolton’s table and shit (a photo op, “VIP” reception, free Diet Cokes, and so on).

I told people I was a liberal when appropriate to do so; I neither led with it nor denied. No one gave me any more than jocular grief for it. I was quick to trot out my bipartisan credentials: I’ve published several articles in National Review, just wrote a book with a conservative, and so on.

The event went down at a Chinese restaurant in the City. There were perhaps 120 people there. Needless to say, most were old, white, and hetero partnered. A smattering of Asian-Americans were in attendance, a couple of Indian-Americans, and absolutely no Blacks or Latinos.

A single person was unfriendly, one of the few younger people there. I tried to chat him up soon after I arrived. Here’s our entire conversation, recalled a few hours later:

ME: The president had a rough day on Tuesday (that crazy news conference where he jumped the Nazi shark).

JERK: Yeah, would you believe everyone in congress is gonna throw him under the bus?

ME: Wait, you’re gonna throw all 535 people in federal elected office under the bus?

JERK: [You’re a] typical liberal, trying to distort the facts (turns away).

I guess he decided I was a liberal from my long hair and Roger Stone-esque suit?

I grappled with the problem of where to sit for a few minutes before joining two couples who seemed to be talking about something serious. I chatted for a little while with the guy sitting to my right. “Albert” had been a career marine, a colonel who’d served with John McCain in Vietnam. This didn’t keep him from complaining about McCain’s recent vote against TrumpCare.

He’d grown up in a Democratic family, then jumped ship for Reagan (as so many do). We talked a little about Vietnam—I went there in 2004—and cars (he has a Porsche and a Jaguar coupe). Then we returned to politics. Col. Albert, who was a trim, distinguished looking, youthful guy, identified as a moderate. I was briefly heartened by the thought we might be able to find some common ground, right up to the time he started railing against Obamacare as a “disaster” and assailed the deceitful media. He also complained about Nancy Pelosi, whom he’d met a couple of times socially. On the air Albert found her to be illogical and robotic; in person, she’d been flummoxed by the fact that he was a veteran. My conversation with Albert ran out of steam after a few minutes and I took up with the person to my left.

“Heleen” was there by herself, and instinctually found her way to our table and my side as one of the few other non-coupled people there. She’s a Dutch student getting a masters in public administration, and is here for a couple of months as part of her studies. She has a job in the Dutch government, and had previously been an army officer (Surprise! The Netherlands has an army!) She wanted to know my thoughts about #Charlottesville. We agreed that it was terrible and upsetting. We chatted about Dutch politics for a bit. Immigration was the biggest issue in their recent elections. She wasn’t very forthcoming about her own politics, but by the end of the night we seemed to have similar takes on what had transpired before us at the dinner.

Another person I spoke with was Sammy, a Filipino-American. Sammy, perhaps around forty, was there with his wife. He had nary a bad word to say about anyone or anything, and didn’t really talk about politics. Instead, he told—seemingly more than once—the story of how his poor immigrant father had done well, and provided a better life for his children. That’s always a nice story to hear, and it accorded with the politics in the room: pro-immigration (i.e., decidedly not the Trumpist position).

Then the speakers and the food started. Here’s something that never came up: the name Trump was not mentioned ONCE. There was the usual procession of assistants to the outgoing chairman of the regional association inter-regional boards (in other words, local party hacks with incomprehensible—to me—roles or titles). The dude presiding did mention, to applause, the need to reduce the number of homeless people—and the failure of Democratic politicians to do so. The head of the local Log Cabin Republicans (the gay/lesbian Republican club) got the same amount of applause as everyone else, which made me happy. Then a guy named John Cox who’s running for governor spoke. He spent a lot of time denouncing “corruption” and “special interests,” then claimed he could win because everyone hates these things. I suppose he’s right about everyone hating corruption and special interests. But he didn’t really say what they were, aside from the Chicago school district (where he grew up) and CalTrans. He also talked about opportunity for small businesses, and called himself a Jack Kemp republican (low taxes, pro civil rights). Alexi thought I’d be a better GOP candidate for governor than Cox (Steve Bannon, with his racism & preferences for a higher top marginal tax rate, is pretty much the anti-Kemp).

Then John Bolton spoke. I live-tweeted this, which sufficed as a way to take notes. My summary: Bolton is an unreconstructed neocon who wants to go to war with the entire world. He makes John McCain look like a flower child. Dude would bomb Easter Island if he could.

He started with Islamic terror, where he said that our vision/mission/strategic imperative should be WAR. Really. Elsewhere in the Middle East, he wants to tear up the Iran nuclear deal (and replace with what?) and tell Russia to get its airbase out of Syria (enforced how?).

On the subject of Korea: he says we should be willing to launch a first strike against them (he didn’t say whether it should be conventional or nuclear, so I’ll give him a smidgeon of credit and assume he meant conventional). He acknowledged as a challenge the ten million or so people in Seoul who are in easy range of the North’s artillery, but clearly didn’t see it as a barrier to our attacking the North.

As for a plan, he said we should initiate talks with China aimed at unifying the Korean peninsula. We’d promise not to put US troops on the Yalu river, on the North Korea-China border, as we did in 1950 (fun fact: General MacArthur pissed in the Yalu, just as Patton did in the Rhine in 1945).

My thought: sure, a unified Korea would be a great outcome (assuming, of course, Southern dominance or even suzerainty). But I somehow suspect that Kim Jong Un wouldn’t like this idea much. Flooding the country with counterfeit money to induce destabilizing hyperinflation, as someone from the audience suggested, probably won’t do the trick. Even Bolton agreed on this.

Other Boltonisms: he endorsed legal high skills immigration, and said we should have a lot more immigration. The crowd didn’t object, so clearly these weren’t Trump’s people. I tried to spot Alexi in the crown by seeing who had initiated spontaneous combustion upon hearing this pro-immigration message, but it didn’t work.

Bolton also said that the attorney general should consider anti-trust action against our tech giants (I assume he meant Google and Facebook, the two with the most say over the content we consume). He attributed his antitrust chops to the time he spent studying with Robert Bork. There was virtually no applause.

Bolton said we should de-recognize Cuba and slap on more sanctions. This will supposedly produce the rapid downfall of the Castro regime. It didn’t work for 50+ years, but hey, never say never. Live your dream, John Bolton.

He quoted Martin Luther King on the great man’s vision of a colorblind society and everyone applauded, including myself and Heleen, the Dutch visitor. That may have been the first time she’d clapped all night.

So what to make of these Bay Area Republicans? My naïve hope is that they’d be old-school moderates, people who’d joined the party long ago in the days when there were genuinely liberal republicans like John Rockefeller and the great Earl Warren, then stuck around on account of tribal loyalties and longstanding friendship circles even as extremism overcame the GOP. Indeed, there wasn’t a word spoken about gays, trans people in bathrooms, immigration, guns, or most of the things typically associated with Trump’s base (needless to say, no one at the dinner remotely resembled those ubiquitous “white working class voters.”) No one, aside from Moustache Bolton, fretted out loud about terrorism. People just seemed to care about money: low taxes and regulation, a business-friendly climate, and so on. But when push came to shove, most still seemed like the Fox News demographic, and all the craziness that entails: Obamacare is failing, the mainstream media lies, and so on. No one mentioned the Nazi marchers and terrorist asshole in Charlottesville (aside from Heleen), let alone Trump’s reaction to it.

After the dinner I sought out the president of the UC Berkeley GOP club, who’d been identified earlier from the podium. I’d written for HuffPost about the riot that ensued earlier this year when the loathsome Milo Yiannopoulos tried and failed to speak at the university, and wanted to ask Mr. President about why he’d invited a self-described troll like Yiannopoulos to speak when there are genuine conservative thinkers available. Mr. President was well-scrubbed, friendly, smart, and um, rocked a bow tie. His response: we invited a wide range of speakers, and didn’t all agree about the merits of Yiannopoulos. However, he did have the ability to reach young people in a way that, say, George Will couldn’t.

And then I decided that this blog post was finished, because I couldn’t stop laughing at the idea of George Will reaching young people.