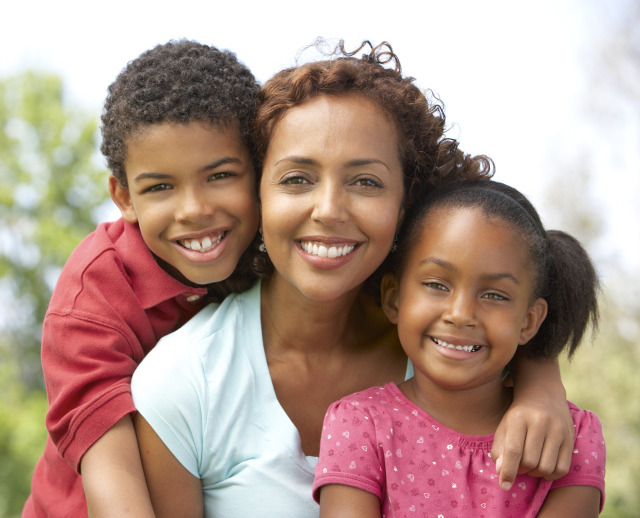 This is an extended version of an essay that appeared in the Pacific Standard on January 8, 2014.

Women made remarkable gains in society in the last 30 years, but single mothers have been left behind. To understand why, we need a more nuanced understanding of who single moms are.

Single motherhood remains central to public discussions of poverty and income inequality in the United States. In 2013, families headed by single mothers were over five times as likely to be poor than were two-parent families. This ratio is remarkably stable: Thirty years ago, it was almost identical.

How can that be? After all, the past 30 years have seen remarkable growth in women’s education, labor force participation, and other attributes that generally lead to greater prosperity. Almost 20 years ago a well-known sociologist, the late Suzanne Bianchi, observed at a congressional breakfast seminar that this growth was already picking up steam: “Men and women are not equal, but when it comes to market work, to earnings, to the jobs they hold, the changes are all in the direction of greater equality.” Yet single mothers haven’t been able to cash in; higher incomes have really only flowed to married mothers and the childless in recent years.

Why? The nature of single motherhood is changing. Back in the 1980s, the vast majority of single-mother families was produced by divorce. Nowadays, with over 40 percent of births occurring outside of marriage, there are many more single-mother families resulting from premarital fertility than failed marriages. But this distinction has been lost on most poverty researchers, who see all single mothers as similar. Scholarship on teenage childbirth also misses the mark—over three-fourths of women who give birth out of wedlock are older than nineteen, especially nowadays, and a few teenage parents are married. 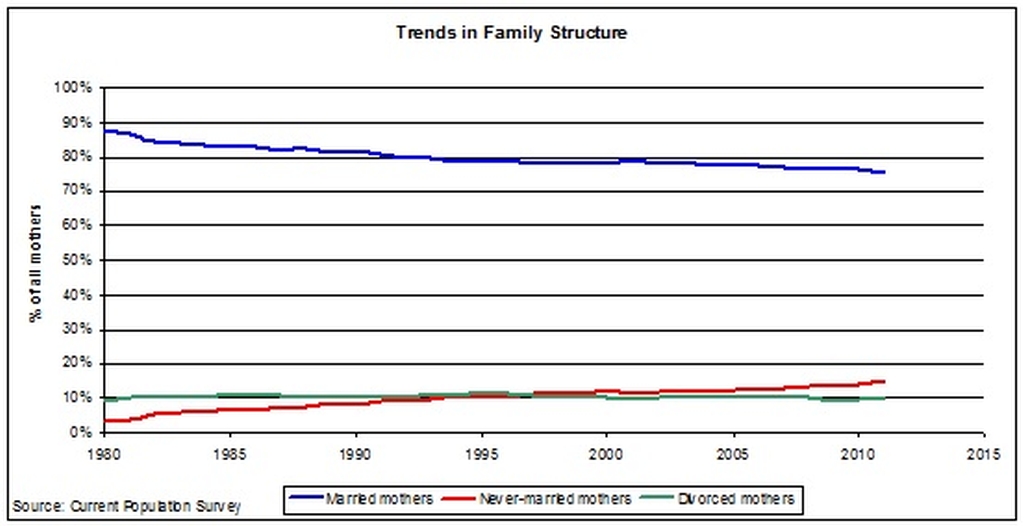 Research I’ve conducted with Haverford College sociologist Matt McKeever shows that these two kinds of single mothers couldn’t be more different when it comes to making ends meet. We’ve looked at data on tens of thousands of women using two different national surveys, the Census Bureau’s Current Population Survey and the Bureau of Labor Statistics’ National Longitudinal Survey of Youth, and the patterns are clear. In the 1980s, divorcées had median incomes more than double those of never-married mothers. Thirty years later, the disparity hasn’t changed much. All women have higher incomes, as measured in inflation-adjusted dollars, but only married mothers have seen really big gains.

THE DEMOGRAPHICS PROVIDE SOME sense of why women who give birth out of wedlock are so much worse off. As we might expect, they have lower education levels—the difference in college degree attainment is especially stark—and consistently lower employment rates than do either married or divorced mothers. It’s especially noteworthy that they work even less than married mothers. Never-married mothers are therefore the least prepared to earn a living based on their basic economic markers—but that’s only the tip of the iceberg.

Women who give birth out of wedlock who graduate from college see less economic benefit from their degrees than married or divorced mothers. We’ve become accustomed to speaking of the dollar value of a college degree—those with college degrees make around $18,000 more a year than high school graduates, and so on—but McKeever and I show that divorced mothers receive returns to a college degree that are almost 50 percent larger than those earned by women who give birth out of wedlock. All women have achieved gains in education and work experience over the past 30 years, but never-married mothers have been singularly unable to convert these gains into actual income.

How can such pervasive difficulties be explained? All signs point to deeply rooted disadvantages that seem to precede even single motherhood itself. Many women who give birth out of wedlock were themselves raised by single mothers, and very often raised in poverty.

And it’s not just money. Women who give birth prior to marriage lack ”cultural capital,” which makes them unlikely to become high earners. Take these two surprising differences: Sixty-three percent of never-married mothers grow up in households that received newspapers, compared to 75 percent of women who ultimately become divorced mothers (and 79 percent of future married mothers). There is a similar disparity in the percentage of homes in which someone had a library card. These aren’t huge differences, but they do exist, Of course, newspapers and library cards are fairly insignificant in and of themselves, but they’re both indicative of cultural capital, the hard-to-measure social resources that promote upward mobility, that facilitates success in higher education and beyond—realms where never-married mothers have continually faced worse odds than do divorced single mothers. 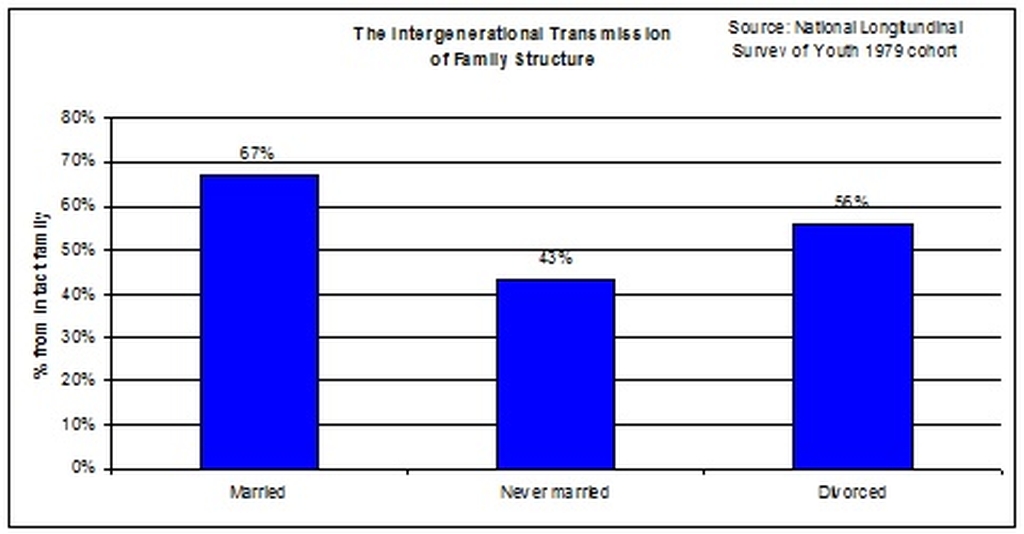 There’s also evidence that never-married mothers are at a disadvantage even before they become mothers. One study by V. Joseph Hotz contrasts women who give birth as teenagers with their peers who miscarry. This naturally occurring experiment showed that the childbirth itself had relatively modest consequences on women’s earning power. In other words, many teenage mothers would have been poor even had they not given birth. Keeping in mind the limitations of comparing teenaged mothers to women who give birth out of wedlock, this result provides strong evidence that never-married mothers suffer from profound disadvantage even before they become mothers.

TAKEN TOGETHER, THIS RESEARCH raises troubling questions about how we might go about lifting these women out of poverty. If never-married mothers have trouble converting their skills into a decent income, merely teaching them more skills might not make much of a difference. An effective intervention would likely have to offer sweeping transformation that begins in women’s families of origin and extends to high schools, colleges, and the workplace. Any of this, let alone all of it, seems unlikely in today’s political climate. Nevertheless, these questions should give us pause in an era when over 40 percent of women give birth out of wedlock and often face decades of low earnings and public service dependence.

Modest declines in the divorce rate coupled with the skyrocketing rate of premarital fertility have rewritten the rulebook on single motherhood and confronted us with a new set of challenges. At least the first step is easy: We can be clear about the terms of the discussion. It no longer makes sense to lump together all single mothers, when we know how different divorced mothers and women who give birth out of wedlock really are.