A recent report from Pew Research’s Center for the People & the Press returned attention to the exasperatingly familiar question of why so few Americans vote. But this study of likely voters–not actual turnout–missed the mark by omitting two of the strongest predictors of turnout. The first is residential mobility.Just one month of household tenure makes you a third more likely to vote compared to someone who just moved.  And if you stay put for five years, you’re almost three times as likely to vote than if you just arrived at your current address. Moving is time-consuming, and you may have better things to do than to find your new polling station.  Since almost a third of Americans move in any two year period, mobility makes a substantial contribution to our low rates of turnout. Motor Voter helped, but the problem remains. And despite irrational Republican fears, mobility isn’t a partisan issue. Both liberals and conservatives move.

Marital status is another question. Research I conducted with the political scientist Raymond E. Wolfinger (yes, my father) established its powerful effects on turnout. Married Americans are by far more likely to vote. A spouse gives you someone to discuss the issues with and lets you share the division of labor associated with voting: remembering to re-register if you’ve moved recently, figuring out where to vote, or perhaps getting absentee ballots.

Unlike residential mobility, family structure matters when it comes to election results. Married voters are especially likely to vote Republican. Given that they’re more likely to vote in the first place, it’s possible that family structure could help explain the results of a tight election.  More generally, this effect portends more votes for the Democrats in the years to come given the declining number of Americans who are married at any point in time. 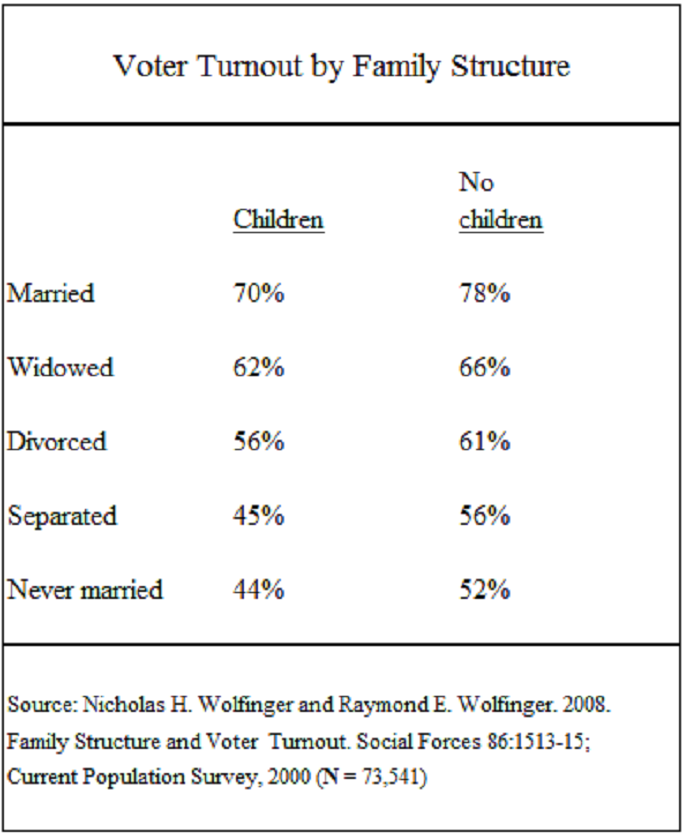