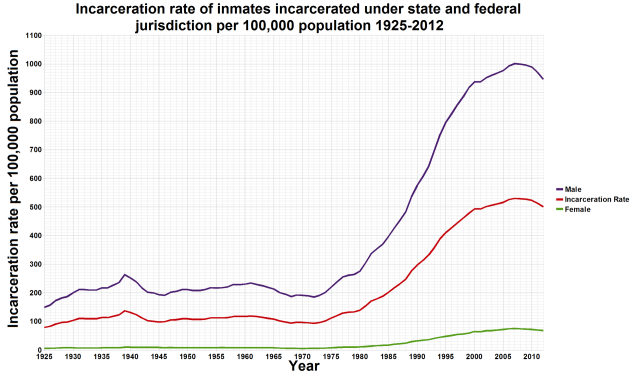 This isn’t a new story, but it bears repeating until something finally changes.  Why have rates of incarceration skyrocketed even as violent crime is at a 40 year low?

For years, it was good politics.  Reagan, George H. W. Bush, and Clinton each had a hand in “getting tough on crime.”  There was bipartisan appeal, and who was going to oppose it?  The criminal PAC?

Fast forward to the present.  America is by far the world’s foremost jailer.  We spend untold billions of dollars, and unnecessarily ruin many lives.  There is now bipartisan appeal in reducing the number of inmates: democrats because of the human costs, republicans because of the financial costs.  Republicans also get to complain about the prison guards’ unions that continue to oppose efforts at reducing incarceration.

Here is the best book on the subject I’ve read: Texas Tough, by Robert Perkinson. Hell, it’s one of the best books I’ve read about anything in the past few years.

A closing thought.  A property manager handles my rental property in Salt Lake City.  She told me in some detail about all the myriad checks she does on prospective tenants, including criminal background.  I was pleased to tell her not to pay too much attention to this.  Certainly there are offenses that would lead me to reject tenants, but do I really care if someone was dealing blow in college, or got into a bar fight while in the navy?