For updated results, I looked at first marriages in the National Survey of Family Growth (2006-2010) using Cox proportional hazards models.

A zero-order model with a linear term for age at marriage shows a 7 percent reduction in the odds of divorce for each year of age (N = 9,269).

This result persists after controlling for race, intact parentage, age at the time of the survey, size of metropolitan area, and sex (N = 9,269).  Note that inclusion of age effectively controls for marriage cohort given the high correlation between these variables. The NSFG respondents were married between 1976 and 2009.

It goes to 8 percent after controlling for same, plus education, religious tradition, attendance, and sexual history (N = 9,110).  Since the NSFG is a cross-sectional survey, these results should be interpreted with caution.

It turns out that a linear term doesn’t properly capture the effects of age at marriage.  To determine the functional form of the marriage age-divorce relationship, I tested a series of models with piecewise linear splines (A quadratic also fit the data, although not as well.)  The best fitting model had a two-piece spline with a knot at age 28.  This model showed that each year of age prior to 28 reduces the odds of divorce by 11 percent.  However, past 28 the odds of divorce increase by 5 percent per year.  The change in slopes at age 28 is statistically significant.  These results were confirmed with a series of generalized additive models (Hastie and Tibshirani 1990), which permit fully nonparametric estimation for continuous variables like marriage age. These models reveal that the effects of marriage age on divorce risk significantly departs from linearity.  A quadratic term also fit the data well. My post in the Family Studies blog displays the results of the GAM; the predicted probabilities are from the spline model.

Here are predicted probabilities by age, based on the spline model (the GAM results look the same):

This result was virtually unchanged after including all of the aforementioned controls.

As is apparent from the above figure, a handful of respondents married at age 12 or 13.  These outliers have no effect on the broader findings.

The median respondent in this sample married in 1998.  I divided the sample into two groups based on this median.  The curvilinear relationship between age at marriage and divorce risk only applies for people married since 1998.  For earlier cohorts, the pattern I describe in Wolfinger (2003) persists: marrying later produces incremental declines in the odds of divorce. 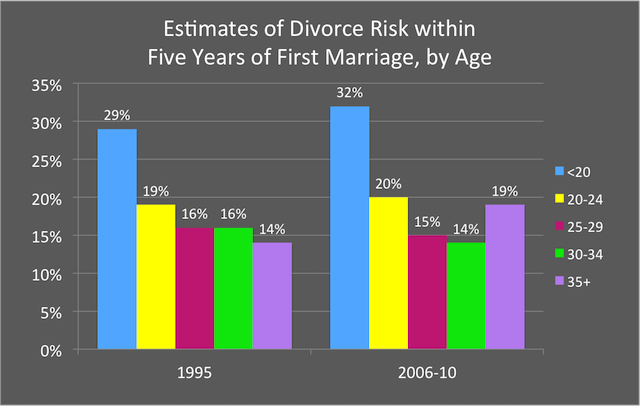 And here are data courtesy of Phil Cohen from the American Community Survey which show the same finding: 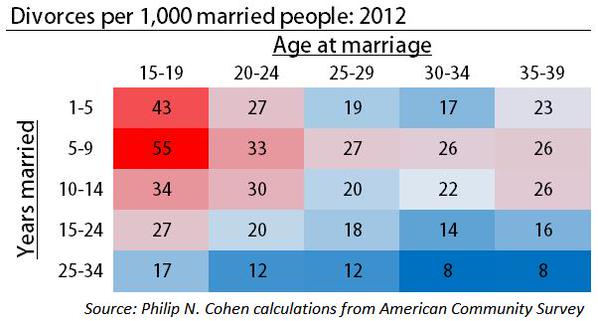 Youthful marriage makes divorce more likely.  However, divorce rates go up past the early 30s (but still don’t reach the high divorce rate for very young spouses).  This would appear to be a recent development, given that I obtained different results based both on data from 1987 and 1988 in my earlier work, and an analysis of earlier marriage cohorts in the new data from the National Survey of Family Growth.  Analyses of recent marriage cohorts that constrain the effects of marriage age to linearity therefore produce incorrect and misleading results.

UPDATE: I replicated the findings presented here in a subsequent blog post for IFS using newer data from the 2011-2013 NSFG,